K-PAX Racing joined together with Flying Lizard Racing to run three McLarens in the 2016 Pirelli World Challenge season.  Alvaro Parente in the yellow car, Austin Cindric in the blue car, and Colin Thompson in the orange car make a vibrant easter basket of colorful entries.

In the Sonoma round, Parente and Cindric showed very similar pace and ran closely together.  In the Sunday race, they ran nose-to-tail for most of the event.  This shot is taken at the quick right/left sequence of Turn 9 and also shows damage on the front of Parente’s car.

Hot off the virtual presses – check out the 4Q 2016 issue of The Southwest Star:

Colin Thompson’s orange and black McLaren provides a sharp contrast against the white retaining wall and red Coca-Cola signage.  Thompson was on the gas and accelerating out of Turn 9 in this shot.  The objective was to get a good panning shot by moving the lens with the car to make the car sharp but everything else slightly blurry to show motion.

The shutter speed of 1/250 was just fast enough to show some blur without freezing the scene completely.  A faster speed would have not shown much blur.  A slower speed may have shown more blur and been more dramatic, but the objective of the shot at the time was to show just enough blur – not so much to throw the background into an indistinguishable splash of color.  Slower shutter speeds can produce more artistic shots, but are more difficult to get and be less useful in conjunction with a story that merely wants to show a good shot of the car rather than a shot that draws attention to the dramatic flair of the photo instead of the car. 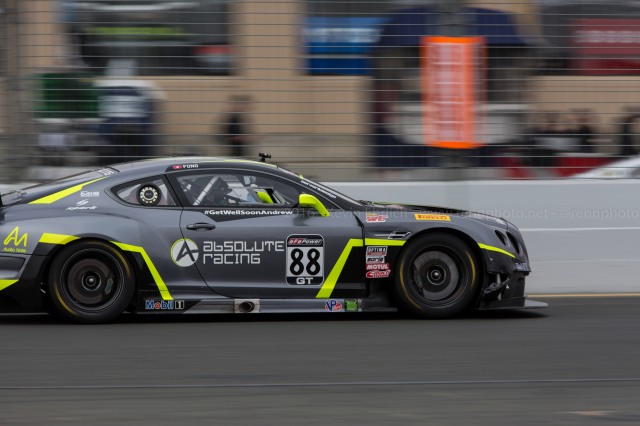 The Absolute Racing Bentley of Adderly Fong is a right-hand drive machine, the only such marque in the 2016 Pirelli World Challenge field.  A prime spot inside Turn 11 looking back towards pit lane provided a great setting for a panning shot at Fong accelerated out of the turn and headed towards the start/finish line.

While the shutter speed is enough to show motion and blur, the horizontal silver fencing between pit lane and the race track creates an interesting backdrop as the gray Bentley whistles by.

Yes, ideally the shot would have included the entire car but the clarity of the Bentley and the backdrop makes it an interesting photo regardless.

Risi Competizione had quite a year with their new Ferrari 488 GTLM in IMSA competition.  The car was so late in delivery that the team got a quick shakedown at Fiorano in Italy before being shipped to Miami and delivered directly to Daytona.

This photo is the car’s very first lap to be turned on US soil.  The team worked feverishly to ensure it would be ready for practice.

Risi ran an incredible race.  No crew pit penalties and only one driver penalty due to avoidable contact meant little contact with race officials.  Contact inflicted by one of the Ford GT cars damaged the Ferrari’s rear diffuser.  Repairs cost the team four laps and the team ultimately ended up running the last 6 hours without a rear diffuser altogether.  The class was incredibly competitive and tight and the team’s 6th place in class was a sparse reward for a very strong debut.

Fast forward to Road Atlanta for the last race of the season at the Petit LeMans.   Risi dominated the class and took a very popular win.  This photo is taken as the car entered pit lane and made the turn into victory lane.

The two photos provide bookends to quite a busy season for Risi.  Congrats and best of luck in 2017!

The IMSA Radio (and Radio Le Mans) team is the world-wide voice of sportscar racing.  With a team of broadcasters led by the dulcet tones of John Hindaugh, they bring the passion and speak to the sportscar fan.  Where other broadcasters might be forced to presume little audience knowledge or speak to surface issues like celebrity participation, the IMSA Radio team is talking about lap counts, fuel stints, historical precedent and lap times.

While they make it look easy, clearly there are years of craft and passion that have built to the current day and material work behind the scenes.  They take pride in the quality of the broadcast and aren’t just looking to “be on the radio” or “announce sports.”  They have done the difficult, invested their own resources, struggled through awful travel logistics, rented the terrible hire car, stayed in the dreadful hotel, and worked with the skeptical sponsors – all because they love racing and want to make it work.  Motor racing is in the blood and it runs deep.

To be fair, the sport owes a debt of gratitude to the team.  They have brought fans together, brought new fans to the sport, given sponsors an engaged platform and injected life into the sport.  They unabashedly acknowledge that calling the races is the fun part – the work happens before and after the race.  The members of the team spent a ridiculous amount of time in hotels and on airplanes and often have different teams covering different races at the same time on different parts of the globe.  They operate in widely varied conditions and settings, bringing a minimum of their own equipment along to each race.

This photo was taken of John Hindaugh and Jeremy Shaw just after the conclusion of the Petit Le Mans.  John and Jeremy were sorting through the finishing order, the stories that arose during the race, and a bit of question with the rules for the Magnus Audi at the finish.  Presumably, the pictures on the screens are a commercial from the television coverage.  Thanks much to John and Jeremy, pit reporters Jim Roller and Shea Adam, and Eve Hewitt who put it all together to make the broadcast happen.  Thanks much to them and all the other IMSA Radio and Radio LeMans team who provide more quality content at more races than all but the most dedicated sportscar fans can consume.

While a sportscar paddock in the United States is generally far friendlier and more accessible than almost any other form of top-tier motorsport, there are some teams and drivers that do more.  Mazda not only supports racing through many forms of sportscar, open wheel and prototype racing, it also affirmatively takes measures to bring fans close to the action.  Mazda and all of its drivers are active and transparent on social media and in press releases.  Its staff is easy to find and always happy to talk.

A very tangible example is this simple sign perched at the edge of the Mazda paddock area.  Mazda is the only team anywhere in the paddock that forms a walkway into the garage between the cars.  Yes, there are belt barriers to give the crew space to do their work, but you can get very close without being a VIP or getting a special invite.

It is a small, but very tangible effort that further increases the engagement between the fans and the sport – and certainly must leave a favorable fan impression of Mazda in the process.  Well done.

The paddock is the fullest on Thursday.  Support races have not been run.  Teams have not yet encountered early issues or crashes that might send them home early.  Four different series ran during the Petit Le Mans weekend – the headline WeatherTech series, the Continental Tire SportsCar Challenge Series, the Porsche GT3 Cup USA and the Mazda Prototype Lites.  That’s a lot of cars, a lot of drivers, a lot of crew members, a lot of tires, a lot of fuel, a lot of officials, a lot of media, a lot of corner workers, and a lot of track and safety staff.  On this Thanksgiving Day, it is particularly appropriate to say thank you to all. 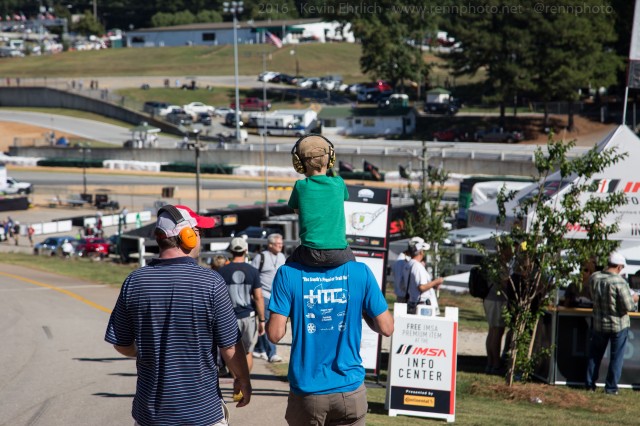 It is always great to see a parent share with a child the things that they find magical.  The child will find their own way and particular things may or may not excite them or become a sustained interest, but having the opportunity to go to the track and share the sights, sounds, and smells is a gift to both parent and child.  This child seems to have found himself with a bird’s eye view as this trio heads down the hill towards the paddock.

There were many kids at the Petit LeMans and credit to the adults that brought them for the adventure.  Kudos to the crews and teams that readily invite the kids in for a closer look, install them in the driver’s seat, and make sure they get some photos to take home for a memory.  Those interactions may only last a few seconds or a minute, but that experience may be a highlight of the event and most adult motorsports fans can look back and recall similar interactions that were formative.  The best marketing for motorsports isn’t about fancy campaigns or social media metrics. 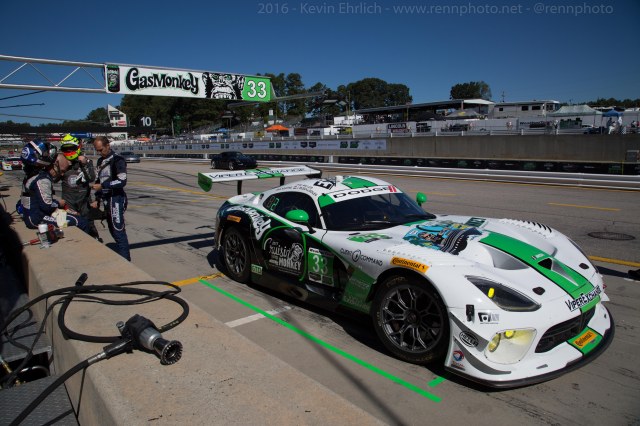 It certainly isn’t a novel insight to note that success on the track stands on the foundation constructed well before the race starts.  One of those key elements is the fluid changes of drivers on pit stops.  With three drivers in each car for the Petit LeMans, coordination is critical.  Team owner Ben Keating and driver Jeroen Bleekemolen were joined by Marc Miller for the event.  While Miller is a competent driver and has been in the Viper before, he is not a regular pilot.

Watching the driver change practice, Bleekemolen is clearly the leader.  Soft spoken but firm, he guides and directs the switches.  Even though each of the drivers has gotten in and out of a race car thousands of times, it is far easier to lose significant time in the pits than to gain it on the track.

This photo was taken at the end of the last practice before qualifying.  The three drivers have just finished practice and are doing a quick de-brief on the pit wall.  The practice must have paid off as the Viper took the GTD win in its last IMSA outing with Bleekemolen in particular driving an epic race.