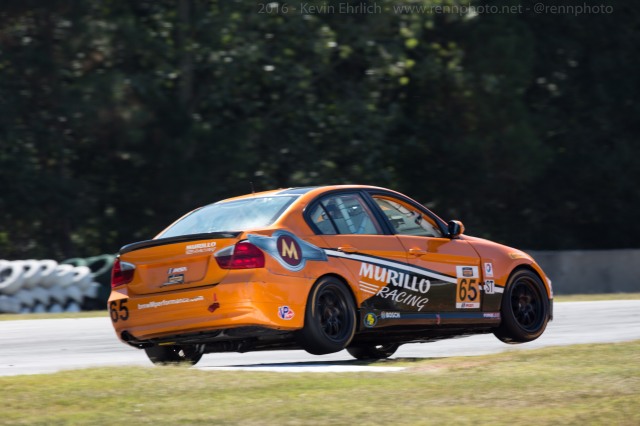 The curb at the top of Turn 3 at Road Atlanta is significant.  This is certainly not the best photo from the corner.  Others were able to get this shot with far more clarity.  It is included here for three reasons.

First, this is the #65 Murillo BWM in the Continental Tire Sportscar Challenge series driven by Brett Mosing and Tim Probert.  No idea who was driving at the time, but handling the curbs is clearly a driver by driver preference regardless of the series.  Some drivers scoot around it, some drivers bound across it, and some drivers find their cars launched sideways across the corner.  It is an interesting corner to watch.

Second, it is one of the handful of photos from that corner with the most violent right side lift-off experience.  Few others have both right sides quite so far off the ground.  Not sure whether that deserves credit for being aggressive through the corner or caution for risking damage, but will let the teams and drivers have that debate.

Third, the photo is an encouragement for next time.  As I mentioned elsewhere in this blog, sometimes poor shots or near misses will be featured for what wisdom they can impart.  The shot is wonderful if it can be captured.  I look forward to trying again.