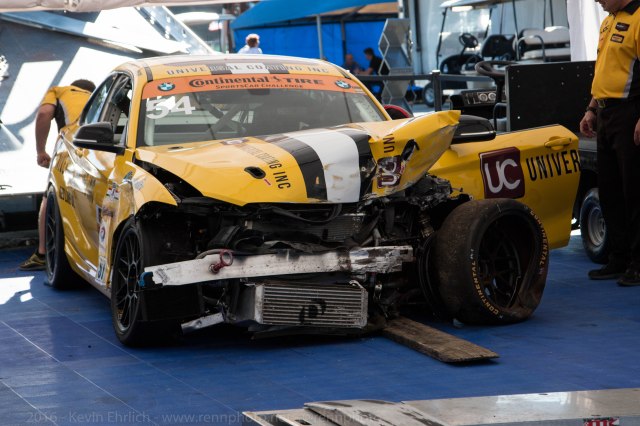 Sometimes getting to the start line can be the biggest challenge.  The BMW of Michael Johnson sustained a hard crash in Thursday qualifying for the Continental Tire Sportscar Challenge support series.  The car nosed into the barriers to drivers right at speed with enough force to push the barriers back several inches.  The track workers winched the damaged car onto a rollback truck and delivered it to the team’s spot in the paddock.

The photo was taken just as the car came off the rollback (which can still be seen in the background) and the team was getting their first look.  The damage was extensive and the team withdrew and was unable to make the race on Friday, ending their season in the paddock rather than on the track.

With apologies to Michael Johnson and JDC Motorsports who are likely pained by the state of their race car and the lost weekend, the only story isn’t always the one told in victory lane.  Usually, these types of setbacks are part of the journey.  As one crew member told me in a matter of fact manner as they were packing up, “Next race is Daytona.”

As if keeping a racecar running and avoiding accidents wasn’t difficult enough, Johnson is paralyzed below the waist.  The car has both hand controls and traditional controls and the teams switches between them as drivers switch.  It is a magnificent example of engineering, endurance, and persistence.  Motorsports is full of engaging stories and teams and drivers like this can always use extra support, so stop by and say hello at a future event.

Thanks much to the team for the friendly invite to take a close look at the hand controls in the car.